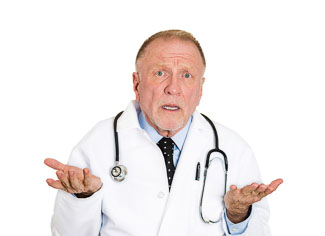 Two problems which increasingly pop up in the healthcare workplace are the acting out behavior of disruptive physicians, and the problems revolving around the declining clinical knowledge and performance of aging physicians. Do you contribute to these issues in any way in your own environment? Hopefully not.

I can tell you that from my perspective as an academic physician and a physician coach, I am seeing a rapid increase in the number of physicians who get referred to me for problematic behavior (“disruptive behavior”) in the workplace. I have served on the Physician Well-Being Committee at Stanford Hospitals for 13 years, where we are having to deal increasingly with physicians who have been identified by co-workers as being disrespectful, disruptive, un-cooperative, hostile, or angry.

In the old days, our committee dealt primarily with physicians impaired by chemical dependency or mental illness. While those problems still exist, acting out behavior in the workplace is becoming a significant issue. In a very real way, the manner with which we communicate with each other, and with other healthcare professionals, is being challenged and evaluated though a different lens than ever before. Hostile behavior, arrogance, explosive anger, and certainly physical or verbal abuse are no longer tolerated from physicians in the workplace. They of course should no longer be tolerated. So, be forewarned!

All physicians are under an ethical obligation to report other physicians who exhibit such behavior. Not only does it create an unsafe working environment, it threatens good patient care and polarizes non-physician members of the team. Finally, such behavior is often due to poor work balance superimposed upon poor stress management skills. Disruptive physicians also have a high rate of major mental health issues, including major depression, and have a higher than usual incidence of unrecognized chemical dependency. These physicians need our help. They should be referred to confidential Physician Well Being Committees who can assist the physician in getting the help and support they need.

A new leading edge of medical staff controversy is beginning to appear: there are many people in the hierarchy of hospitals, medical centers, and medical schools who are concerned there is too little oversight of physicians who are “aging”, and who may no longer be “safe” in the workplace because of any one of a number of perceived problems including out-dated clinical knowledge, deteriorating manual dexterity, forgetfulness, cognitive decline, and decreasing physical energy to name a few. As hard as it may be for you to believe, many centers are beginning to develop assessment protocols to try to proactively identify such “aging physicians” and make efforts to either rehabilitate them, or remove their hospital privileges. Stanford Hospital is among them, and has begun mandatory cognitive testing of all practicing physicians at age 75. I find such a blanket policy like this disturbing, for many reasons, as I sure you would as well.

That said, it is a steam roller gaining momentum. Keep your eyes and ears open about this topic; there is bound to be much more of it coming to your neck of the woods. Better yet, get actively involved with your medical staff organization and hospital committees, so that you may be in a position to better inform this process as it evolves. Consider also
whether you are personally doing all that you can do to keep your physical and mental health, knowledge and skills at optimum performance levels in this world of rapidly changing information and technology.

Words of Wisdom
Low Winter Energy? Do you have SAD?
It’s Autumn Season: Is it Time for You to Make a Change??